Philips
B075QKF3KN
Add to My Favorites

Viewer of This Product Also Viewed

charlie lucas
To heavy to handle
Reviewed on Amazon.co.uk

I have used other model of optimal temp.but this model is strongly recommended. It can handle any garments. Its IQ function doest a good job.

This iron is powerful and it has improved so much the time invested in ironing. Very happy with the value I got

Amazon Customer
For my coming military training, efficient and easy to use.
Reviewed on Amazon.co.uk

I bought this for my coming military training. Before I bought Azur Elite, I bought Azur GC4567/86. Used a wrinkled shirt for tried that 2 irons, the shirt's material and the cutting it needs a lot of patient on ironing time. Azur GC4567/86 it is good for most of the normal clothing however, on the wrinkled shirt some wrinkly it's still left. Azur Elite it works very well on that shirt and saved half of the iron time for me. Then I returned the Azur GC4567/86 and chosen Azur Elite with my coming military training.

Jade
It gets the job done
Reviewed on Amazon.co.uk

At the beginning I was afraid that there is no temperature control, but really adapts itself to the fabric, I iron as linen, cotton, polyester and silk without any problems and especially a lot of steam gives. I guess I never had such a great iron.

Not having to change a temperature dial makes life a lot easier. No leakage, good steam, good on creases. My favourite iron that I have ever owned (and the most expensive).

Philip Vial
Not value for money
Reviewed on Amazon.co.uk

Returned as not value for money and it was faulty. Return was dealt with promptly

I had originally tried to leave an accurate and honest review of this iron on Philips website, however they decided not to publish it: go figure. As a result of their cherry picking reviews, I will never buy from them again. However, the Philips Azure elite iron: it's a good, although pricey iron. From a design point of view, I wish they'd included a spray button, although the shot of steam is good at removing stubborn creases. However, the first one I purchased, after a few months, I found that when plugging in and turning on, the 'iq' light flashed rapidly, which means there is no water in the iron, however, there was. I had to turn the iron off at the plug, then turn it on again before getting it to work. A few weeks later, it started leaking from the soleplate, leaving nasty wet patches on my dry ironing. I contacted Philips and to be fair, they did exchange the iron, although, it did take several months, as they had 'no stock' (the iron was still advertised for sale on line and no notice there was no stock available). When I received the replacement, sadly, this iron also has the rapidly flashing light indicating there is no water in the iron, when there is! Once I get the iron to recognise this (by turning off at the plug and turning on again), the iron is great! Obviously this isn't perfect, and I'd say it was more an annoyance, but I'll live with it. This us a true, accurate and honest review, yet Philips chose not to publish it, so the reviews on their website cannot be trusted.

The best iron I have ever owned and worth paying the extra for it. The only issue I have is that it does take a while to warm up, but the job it does once warm makes you forgive it for that.

I wish I had changed my iron sooner! This is a little on the heavy side but nothing too bad compared to my previous iron. I live the fact that I do not need to adjust the temperature for different items such as going from delicates to jeans. The way this iron automatically adjusts the temperature is magic!

Like some others I have issues with the heating up, sometimes its fine but other times you have to do the IT bit. Turn it off and on again hence the 3 stars for ease of use :). Second time around its fine. I must admit after my Rowenta 400 hole steam iron started creating more water on the clothes than steam (I must admit this is a fantastic iron though and it was only this incident that put me off replacing it like for like) and lots of research i was really sceptical about not having a temperature control. After reading many reviews and watching the videos of it i took the plunge and bought it last September. I must say a sceptic has been converted, it performs wonderfully. I don't know how it works but it does, and very well. As i said, and this is the only reason for the non 5 star review, its frustrating having sometimes to turn it off and on again.

The box came in broken. It appears to be returned by someone earlier and the repacking wasn't don't appropriately. Have not used the product as I am contemplating to return it and reorder again. Hope I will have a fresh, unused stock.

Ketan G.
Does what it says it does.
Reviewed on Amazon.co.uk

Has a temper, sometimes won’t heat up but turn it off and on and it’s good to go. Could probably get it sorted by contacting Philips but I’m too lazy. When it works it’s a great and easy iron that needs no attention. It is pricy but feels worth it.

Quality product with lots of steam and automatic temperature selection. Would be 5 stars if it was a little lighter as heavy weight makes it tiring doing a lot of ironing in one go

This is my first philips steam iron and i was very much impressed by the specification online. I must say that the iron indeed is very good and inspite of being heavy (2kg +) glides over the fabric like the ice hockey puck !The amonut of steam it produces is amazing and therefore gets rid of the creases with ease. It is been days i am using it and so far nothing on the negative side. It senses movement and turns itself off when it is idle, sure this feature saves some electricity as well and offcourse doesnt nurn clothes when left on the clothes. I would definitely recomment this product to all my friends. You also get a 2 year warranty cover from philips , what more does one need!

It is the first time I bought an expensive iron and I'm disappointed. Yes, it won't burn the clothes and it irons nicely with steam. Unfortunately it is quite useless without the steam (just like my old cheap iron). The plate stays nice and clean, and the limescale collection is very useful but i still regret i spent so much money

Philips Azur Elite Steam Iron with DynamiQ intelligent steam release, 260g steam boost and smart Quick Calc Release. Powerful, intelligent iron for perfect results faster. Iron everything from jeans to silk with no risk of burning thanks to OptimalTEMP technology. Advanced DynamiQ mode ensures the perfect amount of powerful steam as you move across a garment. Use MAX setting: maximum constant steam is delivered continuously for stubborn creases. For best result on tough fabrics such as cotton, jeans and linen, it is recommended to use the MAX setting. Steam stops when the iron is put to vertical position.

Our Smartest and Most Powerful Steam Iron

Philips is No.1 Global Ironing Brand* with over 65 years expertise in ironing technology and innovation.

Powerful, intelligent iron for perfect results faster. Iron everything from jeans to silk with no risk of burning thanks to OptimalTEMP technology. Advanced DynamiQ mode ensures the perfect amount of powerful steam as you move across a garment. More steam is automatically delivered on slower movements to help tackle deep creases faster. The motion sensors are highly responsive, so the iron automatically stops steaming when you stop ironing. The Turbo steam pump generates a huge amount of steam power and makes ironing deep creases faster than ever!

** On all ironable fabrics 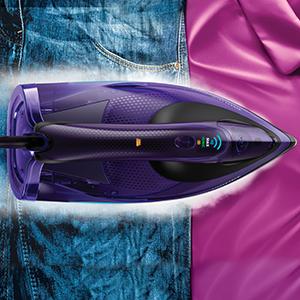 Thanks to OptimalTEMP technology, we guarantee this iron will never cause burns to any ironable fabric and you can iron everything from jeans to silk, from linen to cashmere safely, in any order, without waiting for the temperature to adjust or pre-sorting clothes. Philips steam irons with OptimalTEMP makes your ironing easier and faster and has been tested and approved by independent textile experts for its excellent ironing performance. 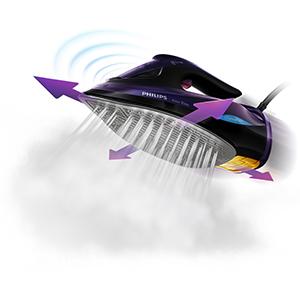 The most advanced motion sensor used in steam irons knows precisely how fast you're ironing and when its standing still. The DynamiQ steam mode automatically releases the perfect amount of steam as you move slower over deep creases to speed up the crease removal and make ironing easier. The steam automatically starts when your iron is moving and stops when you don't move for ultimate convenience and effortless results. 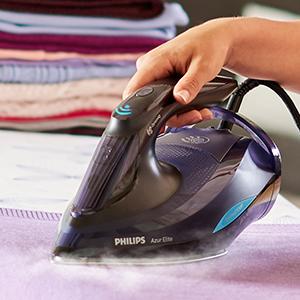 Turbo Steam Pump for up to 75g/Min Continuous Steam

Strong and consistent steam output penetrates up to 50% more steam through fabric to remove creases faster. 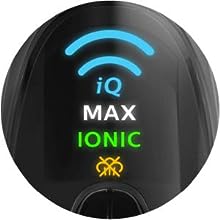 Choose from multiple steam modes. DynamiQ mode delivers the perfect amount of steam automatically triggered by the speed of your movements, Max mode blasts stubborn creases with constant powerful continuous steam, IONIC steam mode breaks the steam up into smaller particles for easier penetration into thicker fabrics and OFF steam enables you switch off the steam. 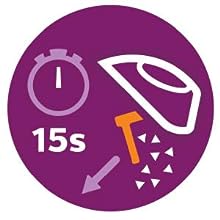 Improved steam generation ensures calc breaks up easily and now collects up to 5x more calc* in container. With Quick Calc Release, the container is easily removed and emptied in under 15 seconds for long-lasting steam performance every day. 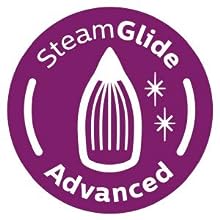 SteamGlide Advanced is our best soleplate for ultimate gliding performance and maximum scratch resistance. Its stainless steel base is twice as hard as a regular aluminium base, and our patented 6-layer coating with advanced titanium layer glides effortlessly for the fastest results. 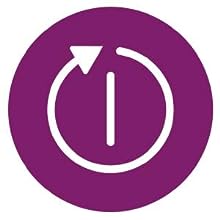 By sharing your comments about the product, you can make the users more secure and quality shopping.